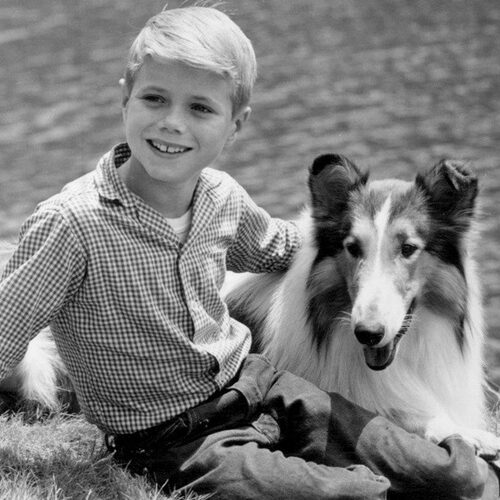 Jon Provost is a national treasure.  The check shirt and jeans he wore for seven years as Timmy on “Lassie” hang in The Smithsonian next to Archie Bunker’s chair.  “Lassie” continues to air in 50 countries and Jon receives letters and email from fans of all ages around the world.

Jon was already a seasoned professional when he won the role of Timmy at age seven.  He was not even three when cast as Jane Wyman and Sterling Hayden’s son in “So Big”.  During his career as a child actor and teen heart throb, he worked with some of the biggest stars in Hollywood:  Grace Kelly and Bing Crosby in “The Country Girl”, Natalie Wood and Robert Redford in “This Property is Condemned”, Rod Steiger and Anita Ekberg in “Back From Eternity”, Clint Eastwood in “Escapade in Japan”, Kurt Russell in “The Computer Wore Tennis Shoes” and on television with Kim Novak, Jack Benny, James Garner and even with that famous talking horse,  Mr. Ed.

By the time Jon Provost was nineteen, he’d worked in film and television for over sixteen years. With a strong desire to try something new, he headed for college in Northern California. Seduced by the beauty of the wine country, he never returned to L.A., preferring eventually to raise a family in Sonoma County. Of his many accomplishments, he is most proud of his children, Ryan and Katie; and he is over the moon about his grandkids, aged 6 and 1 year.

Jon has also earned a nationwide reputation as a philanthropist, giving his time to: children’s hospitals, animal shelters, and humane societies. For 25 years, he served on the Board of Governors for Canine Companions for Independence which provides free service dogs to the handicapped. He is also an advocate for US military K-9 teams, recently signing 4000 photos for war dog teams who served our nation in Afghanistan and Iraq.

Throughout his career, Jon has received many awards, among them, The Motion Picture Council’s award for Outstanding Contribution as a Humanitarian for his dedication in helping the physically challenged, the Allen Ludden Humanitarian Award presented by Betty White and the Lifetime Achievement Award from the Youth in Film Association.  In 1994, Jon was honored with a star on the Hollywood Walk of Fame.

Jon returned to television as Timmy all grown up in “The New Lassie” with Dee Wallace in 1990; and received a Genesis Award for Outstanding Television in a Family Series for a story he penned for the show focusing on the inhumane treatment of research animals. Jon celebrated his 50th anniversary as Timmy with the release of his autobiography, TIMMY’S IN THE WELL which he co-wrote with his wife, Hollywood author, Laurie Jacobson.

Jon added the internet to his resume, directing and hosting short videos about dogs and cats for a Purina website. Recently, he made a cameo in the film “Susie’s Hope” and starred in a commercial for the large retail chain, Jerome’s. Still a sought-after celebrity guest, Jon appears at fund-raisers, comic cons, pet expos and special events throughout the year.